You are here: Home / Fires/Accidents/Disasters / Flooding in Colfax worse than ’93

Up to 300 homes in Colfax are damaged by major flooding. The Skunk River has already topped the previous record crest set in 1993 in the Jasper County town and could rise a few more inches before receding.

Kevin and Beth Lewis’ home is surrounded by flood waters. They escaped shortly before four o’clock this morning after a levee breach inundated the west side of town. “It was just no use.  Our pumps couldn’t keep up with it and it just took over,” Beth Lewis said of the water.

Kevin Lewis describes their hasty exit: “I just shut the main power box off and walked away.” 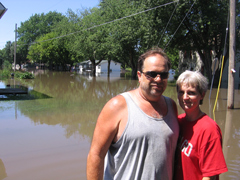 Kevin and Beth Lewis with their flooded home in the background in Colfax.

The couple and their three teenage children have lost nearly everything in their basement – which is completely full of water. Kevin Lewis offered a partial list to a reporter: “The washer, dryer, everything in the TV room (and) the game room — the pool table, hockey table.”  Beth Lewis lamented the loss of “sentimental things” in their home.

This afternoon , the family sat in the back of their pickup truck at the edge of the flood waters – about a block from their home. Kevin Lewis planned to stay there until he could get back in the home. “Off and on, with the other neighbors, I think we’re going to keep an eye on the places,” Kevin Lewis said.  “…That’s added devastation on top of everything if somebody loots you while you’re flooded.”

The family does not have flood insurance. Despite the devastation, Kevin said he’s trying to keep a positive attitude. “You know what, it’s all replaceable,” he says.  “I’m sure there’s people that’s worse off than I am.  I’ve got to look at it that way.  Once (the water) goes down, we’ve got to do what we can to make it liveable again.”

Two of the four roads leading in and out of Colfax are closed – including the Highway 117 connection with Interstate 80.