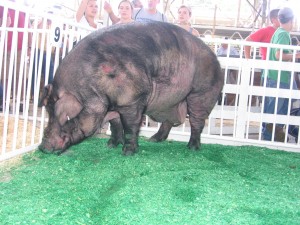 What does it take to win the Iowa State Fair’s Big Boar competition? Apparently, a lot of donuts.

Big D was crowned the 2010 Big Boar Thursday after weighing in at 1,212 pounds. His owner is Michael Bohrn of Ladora. “Basically, how he got his name, we fed him donuts,” Bohrn said. “Not every day, but just when employees didn’t want any more donuts. They’d get rid of the old ones and he’d eat ’em.”

Big D eats around 15 pounds of feed per day – along with the occassional pastry. But Bohrn says raising a state champion big boar also involves a little luck and genetics. “It just takes the right type of pig to do it,” Bohrn said. “You can tell by the time he’s two or three years old if he’s going to get big. It’s basically because of frame size.”

This is the second time Bohrn has entered a boar in the State Fair competition. Three years ago, one of his giant pigs was disqualified because he couldn’t make it to the scale. The boar fell off a trailer and injured a leg shortly before weigh in.

Bohrn was a little surprised Big D landed the blue ribbon this year. “I didn’t weigh him prior to this, so I had no clue,” Bohrn said. What’s next for Big D? Bohrn said he may be headed for the big boar competition at the Texas State Fair. 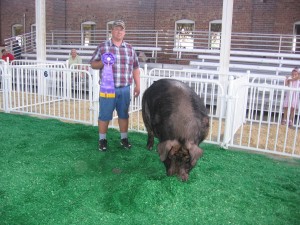