You are here: Home / Agriculture / Pawlenty tries his hand at flipping chops at the Iowa State Fair 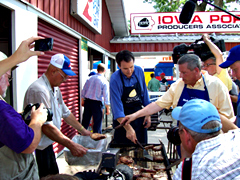 Minnesota Governor Tim Pawlenty visited the 2010 Iowa State Fair on its opening day. The annual Iowa State Fair has been the inspiration for a book, several movies and a Broadway play, but Minnesota’s State Fair typically draws about 800,000 more fairgoers.

Pawlenty, a Republican who is considering a bid for the White House in 2012, did not wade into the Iowa versus Minnesota competition as he spoke with Radio Iowa this afternoon.

“My first impression is this is a fabulous state fair and I think Iowa and Minnesota have two of the best state fairs in the country,” Pawlenty said, “so we’re proud of both.”

Pawlenty stepped right up to one of the hottest spots on the fairgrounds and flipped pork chops on one of the grills at the Iowa Pork Producers stand at the Fair. The chop-flipping is a rite of passage for presidential candidates, but Pawlenty downplayed the significance, saying it was just a part of a bigger trip to headline fundraisers for some Iowa Republicans who’re on the November ballot. 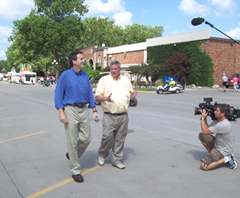 “Since the State Fair started today, we figured this is the place to be,” Pawlenty said. Iowa Ag Secretary Bill Northey, a Republican, escorted Pawlenty around the fairgrounds. Late this afternoon, Pawlenty will be the main draw at a fundraiser in West Des Moines for Republican congressional candidate Brad Zaun.