You are here: Home / Agriculture / U.S.D.A. report says corn harvest will be below 2009 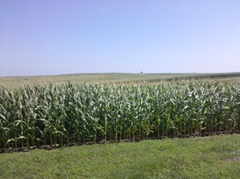 A government report issued today projects Iowa’s corn harvest will likely be smaller than in 2009. The first fall forecast from the U.S. Department of Agriculture indicates excessive rain has damaged crops in Iowa.

The USDA estimates Iowa’s average corn yield at 179 bushels per acre, down three bushels from last year. Despite the possible smaller harvest in the top corn producing state, farmers across the country are expected to harvest a record 13.4 billion bushels of corn this year.

That would be a 2% increase over 2009. Nationally, the average corn yield is expected to be 165 bushels per acre. Iowa is still expected to produce the most corn at 2.3 billion bushels, just ahead of Illinois with a projected 2.2 billion bushels.

The U.S.D.A. is also raising its estimate of the average price farmers will be paid for their corn because of increased demand. Farmers are projected to be paid $3.80 a bushel. That’s up from the roughly $3.50 to $3.60 producers were paid in 2009.