You are here: Home / Politics / Govt / Crowd gathers for glimpse of Gingrich at Fair

A crowd gathered at the Republican Party’s booth at the Iowa State Fair today to get an autograph from Newt Gingrich, the former Speaker of the U.S. House.

Suzie Wheeler of Iowa City held a copy of Gingrich’s latest book.  “I think he knows more about politics and how to fiscally save our federal budget, economy, Social Security — all of that — than the majority of the people out there,” she says.

Wheeler says she hopes Gingrich decides to run for president.  Larry Watson of Persia says he’s looking for somebody new, and it could be Gingrich.

“We need a statesman. We’ve got to get back to the constitution and stick with it,” Watson says. “We’re in a mess.”

Watson watches FOX News in the mornings and often hears commentary from Gingrich there.  “I like what I hear if they say the right things, but they don’t all fulfill the promises that they make. I know it’s tough, but we need everybody on the same page,” Watson says. “We’ve got to work for the common cause, not just their cause.”

Gingrich headed off the fairgrounds to serve as the headliner at a mid-afternoon fundraiser for a political action committee called PURSE, which stands for People United for Republican Sisters’ Elections. 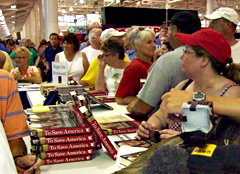