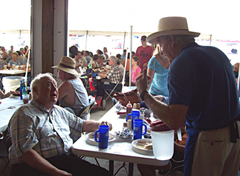 John Culver and Tom Harkin at the Iowa State fair.

A father-son campaign team has hit the trail in Iowa. Former U.S. Senator John Culver and his son, Chet — the state’s current governor — campaigned together last night in Clear Lake.

The duo is scheduled to appear in Waterloo, Dubuque and Clinton before the weekend’s over. Seventy-eight-year-old John Culver says he’s advised his 44-year-old son to keep doing what he’s doing.

“I’m awfully proud of him. I think it’s a remarkable record that he’s achieved in the last three years,” the elder Culver says. “I don’t think they have adequately presented that record to the public and that’s what a campaign’s all about and clearly we’re starting the serious campaign season and I think it’s a wonderful story and he’ll tell it and tell it well and once he does, the people of Iowa will reelect him.”

The elder Culver points to Terry Branstad’s 1982 come-from-behind victory as evidence a candidate who’s behind can close the gap and win. Chet Culver says his dad is helping to “set the record straight” when it comes to his first term as governor. “I think people are going to respect his — while not completely objective opinion, given the fact that he’s my father — his perspective given his own background in government and politics,” Chet Culver says.

“And I think it can only help.” A spokesman for Culver’s Republican opponent says if John Culver visited the state more often, he would hear how Republican Terry Branstad promises to refocus state government on job creation and other priorities if he’s reelected governor in 2010.

John Culver is currently the interim director of the Institute of Politics at Harvard University’s Kennedy School. He served ten years in congress, representing parts of eastern Iowa, before his election to the U.S. Senate in 1974. John Culver lost his 1980 bid for reelection to Chuck Grassley by eight percentage points.