You are here: Home / Fires/Accidents/Disasters / Culver admits “mistakes were made,” says he’s learned from them (AUDIO) 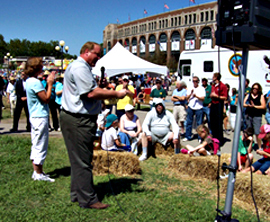 Governor Chet Culver says he’s made some mistakes in his first term, and learned from them.

Culver, a Democrat, faces a tough reelection battle this November against former Republican Governor Terry Branstad. Culver says some of the criticism about his management of state government “is justified.”

“We have made our fair share of mistakes and I take full responsibility…and that’s important for people to understand that I realize that we haven’t been perfect,” Culver says. “But I want you also to know that we’ve given it 100 percent every single day in office under some extraordinarily challenging times for our state.”

According to Culver, those “challenging times” include the floods, tornadoes and severe winter storms which have hit the state over the last three-and-a-half years, as well as the economic downturn.

“I also want you to know that we’ve worked very hard.  I’ve been to Cedar Rapids, Iowa, nearly 100 times fighting on flood-recovery efforts and I have continued to do everything in my power every day as governor to get the job done and to get this state moving forward,” Culver says.  “And so despite some of the mistakes, despite some of the challenges in historic proportions that we’re dealing with, we’re still moving Iowa forward.”

Culver made his comments today at The Des Moines Register’s “Soap Box” on the Iowa State Fairgrounds, attracting a crowd of about 50.  Culver defended his “Iowa Power Fund” which has handed out state grants to spur wind energy development as well as the I-JOBS program which has awarded grants for infrastructure and flood recovery projects. Branstad, Culver’s Republican rival, has criticized both programs.

“We’ve continued to get things done despite challenges that we’ve been dealing with and our record reflects that,” Culver told the crowd.

Culver spoke for about 20 minutes, spending far more time defending his own record than attacking his Republican rival.  “I feel good about a lot of the things that we’ve been able to accomplish,” Culver said.  “I acknowledge the fact that we’ve made our fair share of mistakes along the way and we’ve learned from those mistakes.”

After his speech, Culver told reporters he hopes a “limit” mistakes in the future by ensuring the “lines of communication” within state government reach him and by encouraging state employees at all levels to speak up. “That’s been part of the issue on some of these situations is that people have known that were things going on, but they were scared to say something in fear of losing their job,” Culver said, “so I think we can do more to work directly with our employees to make sure that they know their rights will be protected and that they’re doing us and the people of this state a favor by speaking out if they see something wrong.”

Culver specifically mentioned the problems in the Iowa Alcoholic Beverages Division, where a former administrator spent extravagantly on warehouse renovations, as well as problems in the Iowa Film Office where a former manager approved millions of dollars in state tax credits for film and T.V. projects without proper documentation. Both of those managers were hired during former Governor Tom Vilsack’s administration and Culver suggests he should have assembled his own “team” when he took office. However, Culver told reporters that doesn’t really matter now.

“What matters is I take full responsibility. Happened on my watch. We’ve learned from those mistakes. No one’s to blame but me,” Culver said.  “…We’ve not batted .1000.  You know, we’ve made our fair share of mistakes and it’s important to acknowledge that, but I also want people to know that we’ve never wavered for one second…to try to deal with these challenges.”