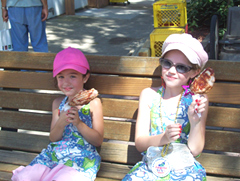 Sisters from Connecticut, ages 5 & 9, enjoy a porkchop on a stick at the Iowa State Fair.

The Iowa State Fair is a homecoming of sorts for some fairgoers.  Michelle McGuill grew up in Coon Rapids and lives in Connecticut now. “Every August we fly home,” McGuill says.  “Once a year is all we can make it.”

McGuill has been visited her mother, who still lives in Coon Rapids, but she took her five- and nine-year-old daughters to the Iowa State Fair on opening day.  “We just see my mom and see the relatives and then come to the fair,” she says.

Her two daughters ate pork-chops-on-a-stick for lunch last Thursday, with a swirl of barbeque sauce on each chop. McGuill’s daughters wore matching dresses for the trek to the fair and her nine-year-old daughter had a ready list of things she likes about the experience.  “The rides, the food — everything,” she said.

Tyler Herrera grew up in Oskaloosa and visited the fair each year when he was a kid.  He and his wife now live in San Antonio, Texas, and for the past five years they’ve been coming back to Iowa for the fair. “Now, I always take my vacations at this time…because nobody wants this time in Texas, so I take it and I get to the Knoxville Races and the Fair,” Herrera said.  “Everything happens right now.”

Herrera brought his 14-year-old nephew from Texas to Iowa this year and the teenager had a goal for his fair food experience. “I want that Twinkie, that deep fried twinkie,” the teen said.  “That sounds really good.”

Before the Twinkie, though, the uncle and nephew posed on the steps of one of the huge tractors that’s on display on the fairgrounds and Tyler Herrera’s wife snapped their picture. “I’ve been on small (tractors), but I’ve never seen one like this,” the teenager said. “It’s amazing.”

The Fair began August 12 and ends Sunday, August 22.  Musicians will gather in Pioneer Hall on the fairgrounds today to see who can win this year’s State Fair competitions for pianists and for people who play the harmonica and the accordion.