You are here: Home / Recreation / Entertainment / Bud tent has a long history at Iowa State Fair 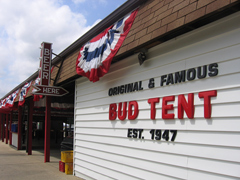 One of the more popular meeting spots for friends attending the Iowa State Fair is The Bud Tent. The location has a long history. It’s a concession stand that’s hard to miss.

The Bud Tent is the largest outdoor beer garden on the fairgrounds – located just south of the Midway rides. Mike Cunningham of Des Moines is the latest operator of The Bud Tent in a long line of family members.

His great-grandfather, Lloyd Cunningham, was secretary of the Iowa State Fair from 1947 to 1962. His grandfather, Doc Cunningham, started The Bud Tent in 1947. Cunningham and his cousins from Nashville, Tennessee and Sioux Falls, South Dakota all take time off work to operate the Bud Tent.

They don’t reveal how many kegs they go through or how much money they make. Cunningham says they just hope to make enough to “pay the bills and pay the Fair Board.” Cunningham admits the battle for beer guzzling fairgoers can be intense, but says the competition is – for the most part – friendly.

“All of us concessionaires are pretty good friends and we get along and try to share with one another successes and failures,” Cunningham said. “But at the end of the day, the more beer permits you have, the more competition there is and the more you’re fighting for that dollar. But as far as the relationship with the other concessionaires, it’s amicable. We have fun.”

This year, Cunningham installed new tables in The Bud Tent and booked live bands or DJs for every night of the Fair.