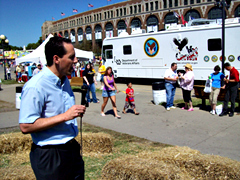 “We’ve got a choice here in this election.  We’ve seen what our current representative has done in the past years and it’s not much,” Campbell says.”I don’t think anyone can think of any major legislative accomplishment that he supported.”

Campbell spoke Monday at The Des Moines Register’s “Soap Box” on the Iowa State Fairgrounds. “I stand before you here today having written as many laws as what our current representative has and that’s zero,” Campbell said. “I think when you’re in office eight years, Iowa and America needs better productivity than that from its representative.”

King’s Republican Party held majority control of congress in his first three terms, which means the G.O.P controlled the debate agenda. Democrats took control of the House in January of 2007.

Campbell describes himself as a “moderate” Democrat who comes from a family of Republicans.

Without  saying King’s name, Campbell suggested the fifth district congressman isn’t spending enough time in western Iowa and seems more interested in national political issues.   “The tone is quite negative. It’s divisive,” Campbell said.  “I think we need to pull together as Americans, as communities to work constructively for a better tomorrow.”

Campbell is a laywer who grew up on a farm near Manning that has been in his family since 1880.