You are here: Home / Agriculture / Vilsack says EPA has sent signal on E15 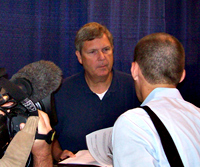 The E.P.A. is considering raising the maximum blend of ethanol in unleaded gasoline from 10 percent to 15%.

“I think that the E.P.A. administrator has indicated that we’re going to have E15.  I think when she talked about labeling and starting to work on that, that’s an indication we’re going to have it,” Vilsack says. “The question is what vehicles will it apply to and, then, how do we build the industry from there.”

Vilsack is visiting the Iowa State Fair today. He held an hour-long forum about the rural economy with a group of Iowans, including Bill Couser, a Nevada farmer who is a past president of the Iowa Renewable Fuels Association. According to Couser, federal officials should have announced an expanded commitment to home-grown fuels like ethanol and biodiesel when the Deepwater Horizon oil spill happened in early May.

“As we look at what happened…down in the Gulf, I was very disappointed when our government had the chance step up to the plate — and that was a horrible catastrophe — but when we have an industry here that’s built and it’s ready to go and it could double within a years if you just turn the key on,” Couser said.

If the U.S. reaches the goal of producing 36-billion gallons of biofuels annually within the U.S. by 2022, the U.S.D.A. estimates $95 billion worth of new processing plants would be built in rural America over the next 12 years.

“It would also generate somewhere between 800,000 and 900,000 of those ‘blue collar jobs with a white collar wage’…which would be located in rural communities throughout the country,” Vilsack said, “and would provide an alternative and additional income source for America’s farmers and ranchers.”

Listen to what Vilsack had to say about the rural economy at the end of today’s forum: Ag Sec 20:30 MP3