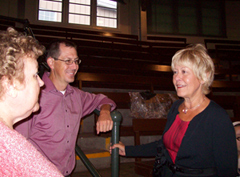 Former Iowa First Lady Christie Vilsack says at the age of 60, she “can’t wait indefinitely” to decide whether to run for office herself.

Christie Vilsack is a native of Mount Pleasant, Iowa, who splits her time between Des Moines and Washington, D.C.

Her husband, former Iowa Governor Tom Vilsack, is working in the Obama Administration as U.S. Ag Secretary.  Since March, Vilsack has dedicated one day per week to campaigning for Iowa Democrats who’re running for office.

“So (last) Saturday it was Maquoketa and Davenport and Cedar Rapids and Indianola, so I really am focused on this election because I think we all need to be and when this one’s over, then, as all of us do whether we’re in the media or whether we’re in the public eye or whatever we’re doing, we start thinking about the next one,” Vilsack said Tuesday. “So I’ll start thinking about the next one then.”

Last fall Vilsack announced she had decided against running for the U.S. Senate seat currently held by Republican Chuck Grassley. Vilsack said during an interview at the Iowa State Fair that she is considering “other options” like running for congress.

“I just turned 60, so timing is important — political timing as well as personal timing,” she said.  “It’ll be a whole new ballgame after the election and after redistricting, where we see the districts line up.”

The Iowa Legislature will redraw the congressional district lines in Iowa for the 2012 election and it’s likely Iowa will lose one of it’s five congressional seats due to population gains in other states.

Being a first-time grandparent is one factor that’s pulling Vilsack in one direction. But Vilsack said women like her, who are in “the third part of their lives” are being recruited to run for office and she feels the tug toward putting her own name on the ballot after working a lifetime to elect others.

According to Vilsack, she’d enter a race with her “eyes open” to what it takes to run and win. “I know, which maybe makes the decision harder. If you have illusions or thinking that it’s glamorous — it’s not that I’m not optimistic, I just understand. I know how much hard work (is required),” Vilsack said.  “I know what the personal sacrifice is.”

There are two women running in this year’s election — second district congressional candidate Mariannette Miller-Meeks and U.S. senate candidate Roxanne Conlin.  If neither win and Vilsack decides to run in 2012, she could be the first woman Iowa sends to congress.  “I think we want the best candidates and the more women running at every level, the better it is for all of us,” Vilsack said.

In addition to her travels throughout the state on behalf of Iowa Democratic candidates, Vilsack has been traveling as the wife of the U.S. Ag Secretary, visiting U.S.D.A. offices in Iowa. Vilsack is on the statewide speaking circuit for another job.  She’s executive director of the Iowa Initiative to Reduce Unintended Pregnancies, a five-year effort that started in 2008.

“I have been a teacher my whole life and a student my whole life and I’m just continuing to learn, so I’m sure there’ll be something really interesting for me to do when I finish the job that I’m currently doing,” Vilsack said. “But I’m trying to focus on my job, dealing with life between two places and really getting Democrats elected to the House and the Senate, so that’s where my focus is right now.”

Vilsack’s husband was Iowa’s governor from January of 1999 through January of 2007.  He briefly ran for president, but dropped out in the spring of 2007. The couple endorsed Hillary Clinton’s bid for the White House and, when the Clinton campaign ended in June of 2008, Tom Vilsack endorsed Barack Obama.

If Christie Vilsack is elected to congress in 2012 and her spouse remains as U.S. Ag Secretary, it would not be unprecedented. Elaine Chao served eight years as President Bush’s Secretary of Labor while her husband, Mitch McConnell, served in the U.S. senate. In addition, Elizabeth Dole served as a cabinet secretary while her husband, Bob Dole, was in the U.S. Senate and Wendy Lee Gramm served as head of the Community Futures Trading Corporation while her husband, Phil Gramm, was in congress.