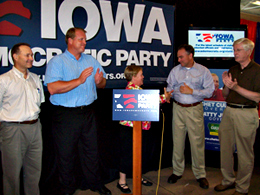 The chairman of the Democratic National Committee says the nation’s two major political parties have collaborated on a calendar for the primaries and caucuses which will be held during the next presidential election.

Democratic National Committee chairman Tim Kaine was at the Iowa State Fair Tuesday afternoon and he was asked if Iowa’s Caucuses will be first.

“The D.N.C., for some of you who don’t know, we’re having a meeting in St. Louis Thursday and Friday and one of the items that we’re doing is we’re setting the nominating contest calendar for 2012 and Iowa is first-in-the-nation and we’re going to vote on that Friday and we’re in great shape.”

The Republican National Committee met earlier this month and endorsed rules which indicate Iowa’s Caucuses will likely be held on Monday, February 6, 2012. The 2008 Iowa Caucuses were moved to Thursday, January 3 after other states scheduled their contests in late January in an attempt to move ahead of Iowa. According to Kaine, the two political parties hope to avoid that kind of leap-frogging in 2012.

“Which really not only keeps Iowa first, but it keeps Iowa-style politics first which is the person-to-person, grassroots style which is such an important part of our country’s tradition and Iowa really leads the way in that,” Kaine said during a news conference in the Iowa Democratic Party’s booth at the Iowa State Fair.

Kaine offered a defense of Democratic Governor Chet Culver, too, calling Culver a “rock star” who has done “historic things” during his first term. “This has been an awful lot to do for anybody under any circumstances,” Kaine said, “but to do this in a very tough time is particularly notable.”

Kaine — who grew up in the Kansas City, Missouri, area — was elected governor of Virginia in 2005 and President Obama asked him to head the Democratic National Committee in January of 2009.