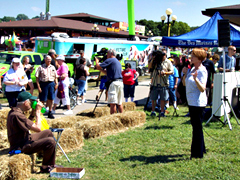 Conlin is the Democrat who’s challenging Grassley’s bid for reelection. Grassley’s campaign accuses her of hiding the identities of her “secret law partners” and “ducking” other questions as, according to Grassley’s campaign, she’s being sued “for refusing to share $75 million in legal fees.”

Conlin says: “Obviously they have absolutely no idea what they’re talking about. This is a group of people who made no contribution to the case who are trying to extort money from me and I’m not to have it. I’m not going to lay down and let that happen. We’re fighting it in court and it’ll all come out in court and what they’re saying is just absolutely ridiculous.”

Conlin gave a speech early this afternoon at The Des Moines Register’s “Soap Box,” something her rival will not do. Conlin told reporters she believes Grassley is “ducking” her and the public.

“And I think he should come out and talk to the people of Iowa, just as I do, including here at the Iowa State Fair,” Conlin said. “This is a long-standing tradition. I cannot imagine how someone would want to miss it.”

Grassley also is the only Republican statewide elected official who has not appeared at the Iowa Republican Party’s booth at the State Fair. Grassley says he’s been to the Fair a few times on his own. “I’m doing the Fair very sporadically,” Grassley says.

Grassley’s trips to the Fair are on what he calls his “free time.”

“But when I do go to the Fair, what I really like to do is spend all my time walking the halls and walking the sidewalks and the streets and just talking to Iowans one-on-one,” Grassley says. “Because that’s where I get an opportunity to actually meet a lot more people and actually get a chance to answer questions and listen to criticism and all that stuff.”

Grassley says he’s never given a speech at The Register’s “Soap Box” at the Fair. Grassley has agreed to one joint appearance with Conlin before the fall election.  Conlin is pushing for more.

Grassley was elected to the U.S. Senate in 1980.  He served six years in congress before that. Conlin is a former U.S. Attorney who ran for governor in 1982 and, as she told the State Fair crowd today, she was “first runner-up” to Terry Branstad that year.