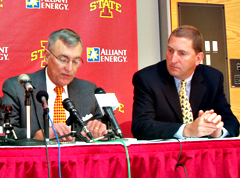 Iowa State athletic director Jamie Pollard says the flooding last hit facilities hard, but he is pleased with the way everyone has responded.

Hilton Coliseum, home to basketball and volleyball was heavily damaged ( see photos below), as were other facilities, but Pollard says it’s not bad when you look around at the rest of Ames. Pollard says while the athletic facilities have been “devastated,” but he says the devastation is nothing like the loss of personal belongings and other things in people’s homes in Ames.

“We can replace the athletic facilities, but we feel much more for those individuals in this city that lost personal belongings, things that they can never replace,” Pollard says, “to us that is far more damaging then the inconveniences that some of our student athletes and coaches have experienced.” University officials say they have to take their time in some cases as they repair facilities to be sure things are properly documented for insurance and FEMA. But Pollard and others say they want to get the basketball arena reopened.

“Our number one goal as we talked about what our priorities were, had to be that we need to get Hilton open for that first basketball game,” Pollard says. He says they are limited in where they can go to play basketball games, and he says there are also some long lead times in ordering new items to replace those damaged by flooding. Pollard says each day they are learning something new about getting things fixed.

Pollard says a good example is the 2,500 retractable seats in the arena circle area have to be replaced, and he says they found the lead time to get new seats is 18 weeks. That time would be beyond November 1st and the start of basketball season. Pollard says an alternative is to buy some folding chairs to put in the area.

“There’s challenges like that, that we’re learning each day, and that’s just going to be part of the fun of putting this all back together I guess,” Pollard said. The water has all been pumped out of Hilton, but the power is still not restored. Reporters were allowed into the building for a time today, and workers were using skid loaders to pick up and haul out piles of flooded material from the lockerrooms.