You are here: Home / Crime / Courts / Zaun says he won’t be distracted by newspaper expose

Republican congressional candidate Brad Zaun says he can “take the heat” of campaigning and won’t get “distracted” by a newspaper’s expose. The Des Moines Register published a story about a 2001 incident in which Zaun was told by police to stay away from a former girlfriend.

“As The Des Moines Register reported this morning, I had some tough times,” Zaun said this afternoon at the State Fair.  After his speech, Zaun told reporters he believes the information about that 2001 incident was leaked to the paper by a “surrogate” of Congressman Leonard Boswell’s campaign.

“This is why people don’t run for campaigns, you know,” Zaun said. “All of you here that are here, if you’ve ever had a heated or emotional argument and I’m not any different than anybody else and it was a mistake that was made and I’m not running from it. What I think is unfortunate is Leonard Boswell and his campaign and the (Democratic National Committee) wants to dig up all this dirt and not talk about the issues.” 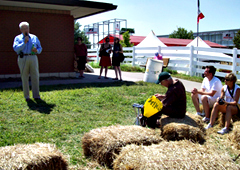 Boswell denies leaking the story. “It didn’t come from my campaign and I was as surprised as anybody else, just as simple as that. I was very surprised and I don’t have a lot of comment about it,” Boswell told reporters this afternoon. “My first thought was, because I work a lot on women’s issues, I felt badly for the woman involved ’cause she’s got to live it again and I don’t like that. I think she deserves better, but as far as that goes, it’s getting into the personal life and that’s all I’ve got to say about it.”

The police report indicates Zaun called the woman repeatedly and banged on the windows of her home in the early morning hours, shouting slurs. Zaun describes it as an “unfortunate” and “isolated” incident.

“And I take full responsibility for it, you know. Let’s move on and let’s talk about the issues.   don’t think, if you polled everybody out here that they’re interested in digging up dirt on everybody,” Zaun told reporters.  “You know, I found something the other day in regards to Congressman Boswell…that he faced bankruptcy at one time and I don’t fault him for that. I have no desire to bring up what he’s done in the past. I want to talk about what I think the Iowans want to talk about and that’s the issues.”

During his speech at The Des Moines Register’s “Soap Box” on the state fairgrounds, Zaun said if he’s elected he will not ask for “earmarks” in budget bills to secure federal funding for projects in Iowa.

“If you all are looking for a congressman to bring back the earmarks and the pork, you need to not vote for me,” Zaun said. “Because someone’s got to stand up and say, ‘We cannot no longer afford this.'”

Boswell — during his speech at the Fair — listed a variety of projects in the Des Moines area which were financed by the federal economic stimulus package.  Boswell is unapologetic about bringing home the bacon.

“I do do that because I want us to have our share and make sure we don’t see everything to go to California or New York or somewhere,” Boswell said. “And so it takes a little bit of skills to work amongst those situations and be sure we get our fair share.”

Boswell is seeking an eighth term in the U.S. House this November.  Zaun is a former Urbandale mayor who currently serves in the state senate.