An independent candidate for governor is proposing a tax break for Iowa workers who are paid by the hour. Jonathan Narcisse says the state should only collect income taxes on 40-hours of work per week, an idea inspired by a recent stop he made at Hardee’s.

“It was about 3:22 a.m. and the young lady who waited on me had to be at her second job at 8 a.m.,” Narcisse says. “Why are we requiring her to pay taxes after 40 hours when she could use that money more than the Google millionaires in Council Bluffs or the Bill Gates’ Microsoft?” Microsoft recently announced it was building a processing center in West Des Moines.

Narcisse outlined his proposal during a speech at The Des Moines Register’s “Soap Box” on the Iowa State Fair. Narcisse told reporters afterwards that the tax break he proposes would not apply to Iowans who earn a salary.

“Every single tax policy and tax policy isn’t going to necessarily benefit everyone,” Narcisse said.  “And I think if we try to keep everybody happy, then we really sometimes just don’t get anything done.”

On other tax issues, Narcisse would phase out the state’s corporate income tax and tie property tax payments to the purchase price of the property rather than the assessed value. He has also proposed lowering the state sales tax to three percent and getting rid of nearly all sales tax exemptions. 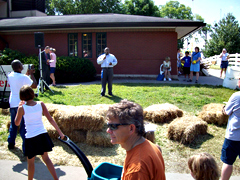 Narcisse pondered running against Governor Culver in the June 8 Democratic Primary but opted instead to run in the fall election as an “Iowa Party” candidate.

Narcisse attacked the two-party system during his speech at the State Fair.  He also criticized the idea this fall’s election will be a referendum on gay marriage.

Narcisse told reporters he wants to advance a “solution oriented agenda” and he won’t just focus on “hot button issues” like gay marriage.