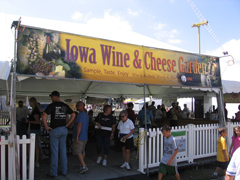 Iowa’s wine and grape growers are adjusting their production techniques to satisfy a demand for drier wines.

Denny Vermulm operates the website www.IowaWines.org– which serves as a marketing tool for the Iowa Wine Industry. He says Iowa’s climate doesn’t allow the growth of traditional grapes that produce popular wines such as Merlots and Cabernets.

“Most of the grapes that we grow here are known as cold climate hybrids,” Vermulm said. “They’re specially bred to survive the cold Iowa winters and produce a usuable quality grape in a short growing season.” In the early 1900s, Iowa was the 6th largest grape producer in the nation.

But, the wine industry in Iowa nearly disappeared through prohibition, several severe winter storms and overuse of herbicides that killed vineyards. The industry’s resurgence in the state started in the late 1990s. Today, Iowa has more than 80 licensed wineries and 1,200 acres of vineyards. Vermulm believes Iowa wine growers are experiencing something similar to what California growers went through in the 1970s.

“People are gradually migrating away from the sweeter wines into the drier wines. We have a number of wineries that are now starting to produce some very good dry red and white wines,” Vermulm said. “I expect that evolution to continue.” He says the greatest challenge Iowa growers face is people who won’t try an Iowa-made wine because they don’t believe Iowa can produce a good tasting wine. Thousands of people are taste testing Iowa wines at the Iowa State Fair.

Vermulm is helping operate the Iowa Wine Industry’s tent at the fairgrounds. Up to a dozen of the state’s wineries are offering samples of their best bottles of wine. Vermulm says it’s a great chance for Iowans to experience a wide range of Iowa-made wines. “We also have some wine flavored gelato in the tent, so people can experience something a little different there,” Vermulm said.

About 5% of the wine consumed by Iowans is produced by Iowa-based wineries, according to Vermulm.