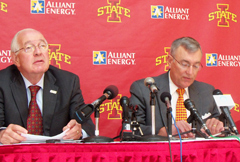 Iowa State University officials hope to come up with a cost estimate on the campus flood damage sometime next week when FEMA representatives visit campus.

Getting all the funding in order to repair the damage could take a flood of paperwork. I.S.U. vice president for business and finance, Warren Madden says the university has several different levels of insurance coverage.

He says it starts with the federally mandated flood plain policy for the first half million dollars of the buildings and contents. The levels continue after the flood plain damage level has been met. The second insurance policy covers buildings and is about $2.5 million in what he says is a Lloyd’s of London type policy.

Another policy is at the $5 million level, and yet another covers the whole campus. Madden says they have to work through the levels of insurance first, and then FEMA funding would take over. He says it would appear based on preliminary information that some of the buildings will be completely covered by the insurance policies, but others will be beyond that.

Madden says the current presidential disaster declaration has the federal government paying 75% of the damage, and the state the rest. Madden says state officials he’s talked to do not believe the damage in the state will be enough to elevate the federal match to 90% like it did following the 2008 floods.

He says the president will not declare a 90-10 match unless the level of disaster is substantially larger than what’s happened this year. Madden says the disasters in 2008 got up to the $420-million level, but it does not look like these disasters will get to that level. Hilton Coliseum suffered some of the heaviest damage, with water flooding the inside of the basketball arena. 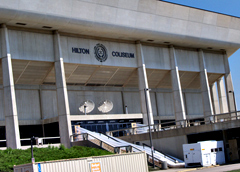 Madden says steps were taken to prevent flooding there after the building was inundated the first time in 1993, but the water came into the building in a different way. Some university of Iowa buildings had to be moved after the 2008 flooding, but Madden doesn’t believe that would happen with Hilton.

“The probability of that I think is you know, almost zero, it’s just not a likelihood,” Madden says. He says there are many ways to mitigate future damage and they will be talking with the experts about that and will have to do a cost analysis. Madden says he understands that FEMA will help in restoring the building and preventing future problems. Madden says FEMA will have to approve any mitigation plans.

Hilton is still without electricity, as is the nearby Scheman Building. Madden says it is their hope to have Hilton back open by the first basketball game in early November.