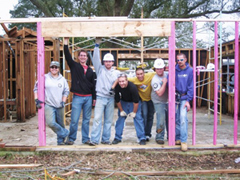 A volunteer team from Iowa is taking part in a massive home rebuilding effort in New Orleans this week on a poignant anniversary. The endeavor is called Fifty for Five.

The goal is to rebuild 50 homes in five days in New Orleans’ Gentilly neighborhood five years after Hurricane Katrina hit.

Johnny Audette, a construction coordinator for AmeriCorps in Des Moines, says he’s thrilled to be among the one-thousand volunteers taking part in this largest-ever effort by Rebuilding Together.

“They’re coming from all across the United States,” Audette says. “It’s going to be basic rebuilding, some painting, structure work. We’ll be putting together houses to get these people back into some semblance of normalcy.”

Members of the Iowa team have done a host of similar projects in Des Moines, Cedar Rapids and as far away as Biloxi, Mississippi, taking vacation days from their regular jobs to accomplish the feats. Audette says it’s hard to believe half a decade has already gone by since Katrina destroyed thousands of homes on the Gulf Coast and claimed more than 1,800 lives.

In addition to being the most expensive natural disaster in U-S history, causing some 81-billion dollars damage, Katrina is also the fifth deadliest hurricane recorded. Audette says he’s eager to return to the Gulf Coast and help residents to recover, rebuild and restart their lives.

“For me, it’s the right thing to do, to give back to the community,” Audette says. “It goes back to a basic principle, neighbors helping neighbors. You lend a hand where you can lend a hand. I just happen to be blessed with talents of building.” The Iowa team will be doing things like building fences, planting trees, tiling floors, painting siding, constructing wheelchair ramps and, lastly, bringing residents of the historic neighborhood home.

Many of the homes in Gentilly are a century old, alongside Lake Pontchartrain. A levee break during the 2005 hurricane left many homes submerged under 12 feet — or more — of water.