You are here: Home / Agriculture / Zaun says he made a mistake on biofuels policy 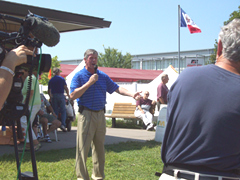 Congressman Leonard Boswell is accusing his Republican opponent of being a flip-flopper, while Brad Zaun — the Republican who’s challenging Boswell this November — says he did a “poor job” of answering a question about his views on farm subsidies.

Democrats point to this Zaun statement, made during a debate this spring. “I just went up to Grundy Center here not too long ago and a farmer said to me, ‘What are you going to do for me and the biofuels industry?'” Zaun said during the debate. “And I said, ‘Nothing.'”

The questioner at the Tea Party debate didn’t mention the tax breaks for biofuels. The questioner had asked Zaun and several of his opponents in the primary whether they would cut farm subsidies and Zaun replied that he’s a “market-oriented” person willing to make “tough decisions” as an elected official.

“But the fact of the matter is is your business — like every business out there — has to stand on its own two feet,” Zaun said.  “When government gets involved and tries to make a business successful, it never works out.”

Zaun told reporters last week that he made a mistake in that answer. “I didn’t communicate and I’m sure that I’ll make a mistake down the road in regards to, you know, when I have speeches and I have cameras following me and tape recorders all the time,” Zaun said.

So does Zaun support the tax break for corn-based ethanol? “I will, if elected to the United States congress, support the 45 cent tax credit, the blenders’ tax credit,” Zaun said. “…If I am put in a position where I’ve got to pick between fighting for Brazilian farmers or Iowa farmers, I’m always — it’s a no brainer for me — support Iowa farmers.”

Zaun, as a state legislator, has opposed bills which would have forced retailers in Iowa to sell only ethanol-blended gasoline. Zaun’s not sure yet whether he supports extended the federal tax credit for soybean-based biodiesel. And Zaun would like to see a “long-range plan” that would gradually lower the tax break for ethanol.

“We’ve got to wean down these tax credits. We’ve got to fix the spending and then we’ve got to fix our tax system and I think that that’s something that’s needed and I want to look at,” Zaun said. “Let’s have a long-range approach rather than this helter-skelter that, you know, these industries have to go through every year.”

Boswell says it seems like Zaun is “jumping around” on the issue. “Will he stay with that or will he change back in a few days?” Boswell asks. “I don’t know.”

Boswell supports the federal tax breaks for ethanol and for biodiesel. “I’ve been on board a long time and I’m going to stay on,” Boswell says. “You can count on that.”

The two candidates made their comments last Thursday during separate interviews with reporters at the Iowa State Fair.