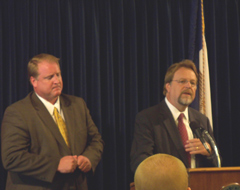 Seven more Iowa Counties have been added to the presidential disaster declaration that covers help for public buildings and facilities. Calhoun, Clarke, Dallas, Hamilton, Ida, Keokuk and Washington counties were added, so there is now a total of 57.

Miller says when FEMA looks at a public designation, they use a pre-set dollar threshold that’s linked to the consumer price index. He says the threshold right now is $1.28 cents in public damages per capita statewide and $3.23 per capita in a county — and both thresholds have to be met.

Miller says it’s much tougher to figure the designation for individual assistance, as FEMA is legally prevented from using a threshold for damages. Miller says they look at income levels, the ability for citizens to incur debts as well as other factors. He says unfortunately Iowa has already been hit by five or six disasters since 2008, and even though those may not have triggered the individual assistance designation, some of the Iowans had been “profoundly affected” two or three times.

Individual Assistance can include grants for temporary housing and home repairs, low-cost loans to cover uninsured property losses, and other programs to help individuals and business owners recover from the effects of the disaster. Miller talked about the disaster declarations Monday as a state recovery program called “Iowans Helping Iowans” was unveiled. You must have registered with FEMA to be eligible to receive help from the state program.

There are 32 counties that have received the federal individual assistance designation in the presidential disaster declaration.