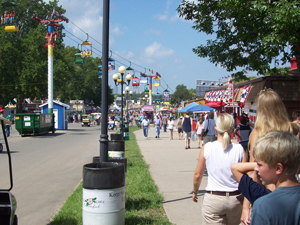 On the concourse at the Iowa State Fair.

Des Moines police say their investigation of attacks just outside the Iowa State Fair grounds has so far not found any indication that the events were racially motivated.

The incidents happened on the first and last weekend’s of the fair. All of the victims were white and all of those charged were black.

Lieutenant Joe Gonzalez says the idea that the events were racially motivated came from a police report. Gonzalez says there were some statements from “general intelligence” inside the fair about the “beat whitey night” comment, and while he says the statements were unsubstantiated, they ended up in the report.

Captain Randy Dawson explained further, saying Sergeant Dave Murrillo was working on a report about a fight at a local hospital and filed the report that included the comment.

“When he made the report, he called the fairgrounds and got that information, that there had been intelligence information that this was beat whitey night,” Dawson explained,” I have looked into it and I cannot find the origin of that comment.” Gonzalez says the victim in the officer’s report was at first unable to comment on what happened and when they did talk to him, he did not know who attacked him.

Gonzalez says the incidents involved a large number of people and they were confusing to sort out. He says the initial investigations have not shown anything that the victims have told detectives that indicates the incidents were a racially motivated, and the investigation is cotinuing. Gonzalez and Dawson say things have been further complicated because the people charged do not want to talk to police. Police filed 15 charges against four adults and seven juveniles.

The charges included five counts of disorderly conduct, three counts of interference with official acts, one simple assault, two counts of willful injury, two counts of assault on a police officer, and one count of carrying a weapon. The fights and their potential racial motivation have drawn national attention.

Dawson says they understand the attention the issue has received. “It’s a big deal for all of us…for the department, for the City of Des Moines, for the neighbors in that area, for the future of the state fair, it is a big thing that we need to get our arms around,” Dawson says. Dawson says they have created a commission made up of the various law enforcement officials involved so they can review the incidents and see if any changes need to be made. He says they will also continue trying to sort things out and want to assure the public they are taking action.

“You know you don’t want somebody from Paulina, Iowa coming down here and paying 10 dollars to get in for he and his wife and kids, and 10 dollars to park and before you know it you’re out one hundred dollars and you’ve barely gotten inside and then have to worry about getting assaulted too. We don’t want that. Nobody wants that,” Dawson said.

Gonzalez says they don’t want these incidents to tarnish the long tradition of the fair.

Gonzalez says it’s “unfortunate” that all of the news agencies across the country are reporting this and “making it look like its unsafe, like it’s this big big issue.” “And so we are actively trying to save, get back the reputation of the state fair, one of the greatest fairs in the country.”

Gonzalez says they are asking anyone who may have any information on what happened during the incidents to call them to help with the investigation. Gonzalez says it appears that each of the incidents was unprovoked as groups of 8-10 black males attacked the victims.