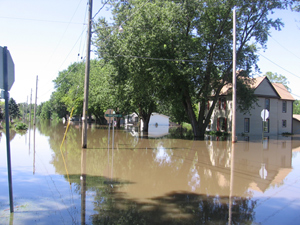 The U.S. Department of Housing and Urban Development has awarded Iowa just over $84 million in disaster recovery funds linked to the floods and storms of 2008.

“We will put this money to good use,” Culver said. “It will help us potentially save lives and protect businesses all over the state of Iowa, which has really been our focus as we rebuild from the 2008 floods.”

The $84.1 million is designated for flood prevention projects. It’s the largest of 13 grants awarded to states by HUD today worth at total of $312 million.

Culver says around 30-million additional state dollars from the Iowa Jobs and Infrastructure Initiative will be distributed along with the HUD funding. Tim Waddell with the Iowa Department of Economic Development says the HUD money can be used for a variety of unmet needs.

“We have a great deal of unmet needs including housing issues, business issues and infrastructure issues,” Waddell said. “None of those have been met. So, those are primarily where the dollars will be allocated.” HUD officials say Iowa can use the $84 million to buyout homeowners living in high risk areas or to elevate and reinforce existing properties. The money can also be used to develop new land use plans for flood prone areas.

HUD has now awarded more than $642 million to Iowa in the past two years through its Community Development Block Grant program. HUD Deputy Secretary Rod Sims praised Iowa for using roughly half of that money on flood mitigation efforts.

“Sometimes it’s a hard sell to convince individuals to invest in the future when you have so many immediate needs,” Sims said. “But Iowans understood that these were sound investments. In fact, for every dollar spent in these hazard mitigation programs, Iowa will save four dollars from the price tag of the next disaster.” Sims said the calculation of savings is based on a 2005 study by the National Institute of Building Sciences.