You are here: Home / Business / Cedar Rapids trucking company benefits from cutbacks in the industry 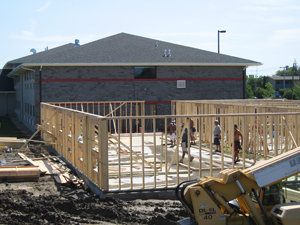 A Cedar Rapids trucking company is taking advantage of the downturn in the economy to create an upturn in its business. C.R.S.T. International has begun a one-million dollar expansion of the training facility it opened just two years ago.

Rusch says the training facility allowed them to house 96 drivers, but they’ve expanded so much that they have been at capacity, and have been spending $10,000 a week on local hotels for drivers. The expansion will allow 175 drivers to stay at the facility while they undergo training.

Rusch says the downturn in the economy dramatically cut the number of trucking companies, with an industry report that some 7,500 went bankrupt. He says in addition to the ones that went bankrupt, many of the other big carriers downsized and sold off some of their trucks. Rusch says all the changes left the industry with no surplus of trucking as things picked up a little in the economy — and his company is trying to fill that need.

Rusch says their goal is to reach one billion dollars of revenue in the next year, and he says it’s not because the economy is that strong, but because so many of their competitors have left the business. Rusch says the economy and need for trucking improve some at the start of this year and that helped C-R-S-T’s expansion plans.

“Demand increases a little bit, and if supply has been driven down like we’ve seen in our industry over the past three years, those that are surviving are seeing some pretty good times,” Rusch says. The down economy has also been a positive when it comes to finding people to fill the trucking jobs.

“With high unemployment, there’s more people out there looking, so we do see a better quality driver,” Rusch says. He says there are lot of people from the construction, housing and automotive industry that have seen their jobs go away and look to the trucking industry for new jobs. Rusch says C.R.S.T. International is the sixth largest truckload carrier in the United States.