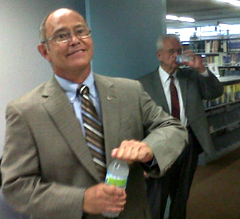 One of the seven Republicans who competed for the G.O.P.’s nomination for congress in Iowa’s third district has endorsed the Democratic incumbent.

Mark Rees, a retired architect from West Des Moines, says Brad Zaun — the victor in  the G.O.P. Primary — is “too far to the right” on “virtually all issues.”  Rees says he decided shortly after the Primary that he would endorse Congressman Leonard Boswell.

“I focus on the issues and ideas, on character and that’s how I vote my conscience,” Rees says. “I don’t vote along party lines.”

It’s unclear what impact the Rees endorsement may have on Boswell’s race. Rees told reporters today he’s not been that involved in Republican Party politics and he’s been a registered voter in both major political parties.

Boswell’s campaign organized a news conference this morning (Monday) to highlight the Rees endorsement.  “I didn’t go to him.  I didn’t seek him out,” Boswell said.  “He  came to us and it, you know, it was a pleasant surprise.”

Does Boswell expect Rees to bring other Republicans along? “I haven’t thought about it at all. I haven’t given it one moment of thought, so this was a surprise,” Boswell told reporters. “It was a welcome surprise and as simple as that.”

Boswell is seeking an eighth term in congress.

Boswell’s Republican opponent, Brad Zaun, held a news conference right after the June Primary with five of his former G.O.P. foes who endorsed his bid to unseat Boswell. Rees did not attend that event, but Zaun told reporters back then that Rees supported his candidacy.

The executive director of the Republican Party of Iowa says voters should take Rees’ comments “with a grain of salt” since Rees has been a “registered and active Democrat” in the past.  Zaun’s campaign manager says Rees has thrown his support behind a “14-year, career politician” who “embodies” business as usual in Washington. The Zaun campaign has not addressed Zaun’s statement in June that Rees supported his candidacy.