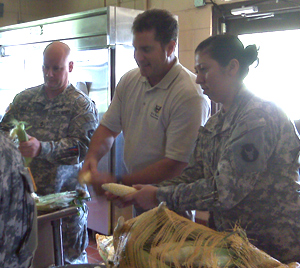 Thousands of ears of sweet corn were delivered to the Army base in Mississippi where Iowa National Guard troops are training before heading off to duty in Afghanistan.

Congressman Bruce Braley of Waterloo arranged to have 400 dozen ears of Iowa sweet corn delivered there yesterday so the Iowa soldiers could have one more taste of Iowa before they deploy.

“I grew up in Iowa loving sweet corn and watching the huge amount that was delivered down here makes me very hungry for dinnertime,” Braley said during a telephone interview with Radio Iowa.

Braley got the idea while visiting Iraq with a congressman from Mississippi this past December. Braley participated in “Operation Gumbo Drop” which involved the two congressmen helping to serve 7500 pounds of gumbo and shrimp to Mississippi National Guard soldiers on duty at a base north of Baghdad.

“That’s when I decided if I ever had the opportunity, I wanted to do something similar for the Iowa National Guard,” Braley said. “My office staff worked with a group of great Iowans to help put this all together.” 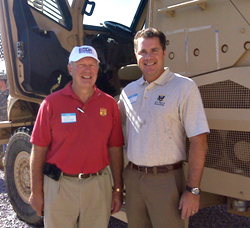 Fareway Stores donated a truck and the truck’s driver donated his time to drive the sweet corn south.  The Iowa Farm Bureau, several eastern Iowa veterans organizations as well as individual Iowans contributed corn, some melons and money to the effort.

“So it’s just a great example of Iowans working together to try to provide a little taste of Iowa for some brave men and women who deserve a little tasty treat,” Braley said.

Braley spoke with Radio Iowa at about a quarter ’til four yesterday afternoon — and he was heading back to the “mess” to help prepare for the evening’s sweet corn feed. “I personally was involved in husking a large amount of sweet corn and there’s still a lot more to be husked before dinner time,” Braley said, with a laugh.

About three dozen Iowa business owners were at the camp, too, part of a delegation flown there by the military.

Iowa Business Council executive director Elliott Smith was among the group that arrived at Camp Shelby on Tuesday.  “It’s really a remarkable experience,” Smith said during a telephone interview.

“We’ve seen how they handle check-points, how they deal with local Afghans. They actually have native Afghans here speaking the language to really simulate, as closely as possible, the encounters they’ll have with villagers and elders.”

The Iowa Business Council’s executive director, along with nearly 40 Iowa business owners, made a 36-hour trip, and got back to Iowa yesterday. “We’ve all been hugely impressed with just the rigor and the enthusiasm and the motivation here,” Smith said about an hour before the Iowans left Camp Shelby. “They’re doing a great job.”

Some of the business owners on the trip have workers who are on leave from their job because they’ve been called to active duty.  “Actually some folks came down here with lists of employees or even family members that are down here right now training and we’ve been crossing paths with them periodically,” Smith said. “It’s been fun to watch the reaction when we find people we know.”

Almost 3000 Iowa National Guard soldiers are at Camp Shelby, then they’ll ship out to a base in California before leaving for Afghanistan.