You are here: Home / Agriculture / Thicke says state has authority to inspect feed at DeCoster operations 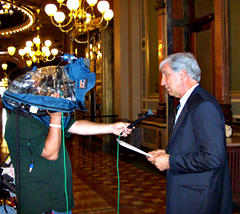 Francis Thicke does an interview at the statehouse.

The Democratic candidate for state ag secretary says the Republican who is currently serving as Secretary of Agriculture has had the authority to inspect the feed that’s been cited as a likely cause of the salmonella contamination at two Iowa egg operations.

Francis Thicke of Fairfield, the Democrat running for state ag secretary, says he’s been waiting to see if Ag Secretary Bill Northey, a Republican, would “step up” and take action on the matter. “But so far it appears he’s avoiding the issue and, at best, is making excuses,” Thicke says. “To me, it’s a national embarassment to Iowa and it’s damaging to our reputation as the producer of quality food.”

The Iowa Department of Agriculture has the authority to license and inspect commercial feed mills. Thicke says he supports the “common sense” exemption Northey’s agency has provided to individual farmers who grind feed on their own farm for their own livestock. “Every tractor with a mixer/grinder shouldn’t have to be inspected,” Thicke says. “However, to exempt a facility that grinds over 12,000 semis per year of feed —  it belies common sense.”

The feed being fed to the chickens on the two Iowa egg facilities at the heart of the recall is produced by Jack DeCoster, and Thicke says DeCoster should not be among the farm operations which are exempt from state inspection of feed. “If I were secretary of agriculture, I would see solutions, not excuses,” Thicke says. “I would step up immediately and exercise the full authority granted by the law to assure Iowans and all Americans that we can and will protect our food supply. If I found regulatory holes that endangered our food supply, I would work with the Iowa legislature to create a stronger regulatory framework, so I think that secretary of agriculture should take action right now.”

Thicke made his comments this morning during a news conference at the statehouse.   Listen: capft

Dustin Vande Hoef, Northey’s campaign spokesman, issued a written statement.  “It is very disconcerting that a candidate for Iowa Secretary of Agriculture would advocate stepping beyond the Department’s legal authority and violating private property rights,” Vande Hoef said. “In Mr. Thicke’s statement, he expresses a desire to target private farmer feed mills based on size, and the definition of what constitutes ‘large’ would rest with him alone and have nothing to do with what the law actually says.”

According to Vande Hoef,  Iowa law allows the state ag department to license and inspect commercial feed mills that sell or distribute feed.  “As a result, it does not apply to private individuals that mix feed for their own animals,” Vande Hoef said. “The law makes no distinction based on size and gives no authority for the Iowa Secretary of Agriculture to pick-and-choose private feed mills to inspect.”