“Today I’m outlining three proposals that are not earth-shaking, but I think they are important to the seniors in the state of Iowa,” Branstad told a packed meeting room at the Wesley Acres retirement community in Des Moines.

Branstad promised to “celebrate” the contributions older Iowans have made to the state. Secondly, Branstad said he’d pursue policies that help the elderly stay in their homes as long as possible, and he also pledged to promote programs the provide information to seniors so they can make “informed decisions” about services that may be available in their home communities.

Branstad drew laughs, applause and a few “ahhs” at the beginning of his remarks as he gave the crowd a report on his children and grandchildren.  Wesley Acres is next door to Des Moines University, where Branstad served as president until last October. 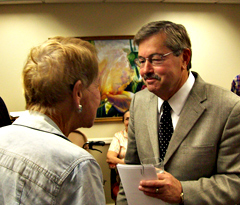 Terry Branstad talks to a resident of a Des Moines retirement home.

“It’s great to be back in the old neighborhood,” Branstad said, laughing. “I was at Des Moines University for six years and three months as the president and, of course, I lived down the street for 16 years and I hope to get back there, too.”  That’s a reference to Terrace Hill — the governor’s mansion — which is just a few blocks away from Wesley Acres.

Listen to all of what Branstad had to say today: Branstad 6:56 MP3