You are here: Home / Sports / Hawkeyes set to kick off season of great expectations 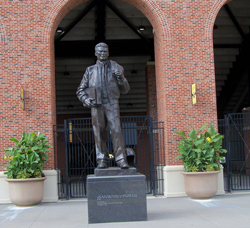 Statue of Nile Kinnick outside Kinnick Stadium in Iowa City.

A much anticipated season for the Iowa Hawkeyes gets underway when they host Eastern Illinois in Kinnick Stadium. Following a win in the Orange Bowl the Hawks enter this season ninth ranked and are expected to challenge Ohio State for the Big Ten title.

In was just a year ago that the Hawkeyes wiggled off the hook in their opener against U.N.I.

Iowa coach Kirk Ferentz says the moral of the story is there just aren’t a lot of easy games and if you go into a game thinking it’s not going to be competative, you are going to suffer.

“I’m not saying that we did that last year, but as it turns out, we played a team that was very good and they were ready to play, and I don’t think we looked great,” Ferentz says.

Ferentz says there always a lot of question marks heading into the opener. He says they have a lot of new players out there and you never know how things are going to turn out. Ferentz says his biggest hope is that they come out and play good clean football and avoid turnover.

Iowa’s offense is usually anchored by the ground game but with quarterback Ricky Stanzi and an experienced receiving corps returning the Hawks could be more explosive this season. He says they have a chance to be better in the passing game and the receivers and tight ends have practiced well and hopefully the can get good production in the passing game.