You are here: Home / Military / Iowa businesses honored for support of the National Guard 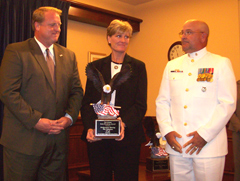 Governor Chet Culver, along with Lynne Spangler of Bandag and Chief Petty Officer Michael Bewley, a business analyst for Bandag.

Three Iowa businesses and Iowa State University have been honored for their support of National Guard and Reserve members. Rob Kelly, vice chairman of the Iowa Committee of the Employer Support of the Guard and Reserve, was master of ceremonies for an awards presentation today at the statehouse.

The 2010 “Iowa Freedom Award” was presented to two large employers. Bridgestone Bandag Tire Solutions in Muscatine continues to provide benefits to employees in the Guard and Reserve who are called to active duty. “They also went above and beyond in supporting family members,” Kelly says, “and sending care packages from fellow employees.” The John Deere Des Moines Works in Ankeny was the other large employer honored.

“This employer has been recognized numerous times for going above and beyond what is required by the law,” Kelly says. “…Additionally John Deere conducts send-off and welcome home events for its employees and sends care packages during deployments.” Salzman International in Davenport is the small employer recognized with a 2010 Iowa Freedom Award. 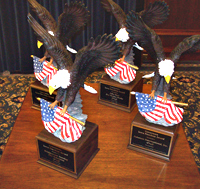 Awards given for support of the Iowa National Guard.

“This employer continues to pay and provide benefits to its military members during deployment. Salzman also sends care packages to its employees while deployed,” Kelly says. “Additionally, the CEO is an active volunteer for (Employer Support of the Guard and Reserve), serving as area chairman and providing on-going support to Iowa employers and military service members.”

Iowa State University was recognized as a public sector employer that has gone “above and beyond” in support of workers who’ve been called to active duty. Governor Culver signed a proclamation today, declaring September 19 through the 25th as Employer Support of the Guard and Reserve Week in Iowa.

“Support from family and community is critically important,” Culver says. “But another partner in service too often overlooked is their employer who allows time off and holds a job open for a service member.” Iowa State University, along with the three Iowa companies, are being nominated for national awards as well as the state awards handed out this morning.

Governor Chet Culver, along with Lynne Spangler of Bandag and Chief Petty Officer Michael Bewley, a business analyst for Bandag.