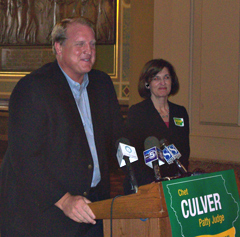 Governor Chet Culver says if he’s reelected in November he wants to sign a bill next year that would make Iowa casinos smoke-free areas.

“I think that’s the logical next step,” Culver says, “to keep pushing, to make this a healthier state.”

Culver signed the Iowa Smoke-free Air Act in 2008, but an exemption included in the law allows smoking to continue on the gambling floors at the state’s casinos.

“I know that Iowans are also very upset about the exemption that was carved out for those casinos and a lot of people were wondering why that was,” Culver says. “And I think that would be a natural place to go.”

According to Culver, it makes “common sense” to keep people away from “harmful” second-hand smoke. “I will say, though, that I think our law that I signed is as expansive as any law in the nation, that it did cover 98 percent of public places and that took a lot of effort, a lot of hard work,” Culver says.  “So that was still a huge victory.”

Culver made his comments this afternoon during a statehouse news conference with Vicki Kennedy, the wife of the late Senator Ted Kennedy.  She is the featured guest at a fundraiser this evening in central Iowa for Culver’s campaign.

Culver, a Democrat, is seeking reelection to a second term this November.  Terry Branstad, Culver’s Republican opponent, also supports getting rid of the exemption which allows patrons of the casinos in Iowa to smoke while they’re on the gaming floor.