You are here: Home / Sports / Both Iowa and Iowa State look for improvement in big game

Iowa and Iowa State collide for the 58th time in Kinick Stadium. Iowa won last year’s matchup 35-3 in Ames but Hawkeye coach Kirk Ferentz says six Cyclone turnovers made the score deceiving. Ferentz says they couldn’t stop the run last year and will be tough to win if they give up 190 yards on the ground again this year.

The game will mark the return of running back Jewel Hampton who missed last season due to a knee injury. He will team with sophomore Adam Robinson in the backfield. Ferentz says they expect both to play and don’t know how they will mix up the carries. Ferentz expect Cyclone quarterback Austen Arnaud to have a big season because it is his second year with the same offense. He says there’s always a transition when you change offenses and defenses.

Ferentz says the defense needs to do a better job against Iowa State’s zone read. It is a play where either Alexander Robinson runs it or Arnaud takes the ball and runs it himself. He says the need to get off blocks better and then have to honor their positions and be disciplined.

Iowa State coach Paul Rhoads says last year’s game against the Hawkeyes was a low point of the season. He says that was because they played to poorly and the turnovers didn’t give them a chance to win. Rhoads says they pride themselves on playing smart and playing sound and they didn’t do it int he game last year. 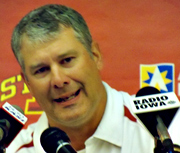 Rhoads says Iowa’s defensive line is so effective because the Hawks dont need to use extra defenders to stop the run. He says most teams pack it in at the line, but Iowa doesn’t have to do that as they have guys who can get off blocks and stop the run. Rhoads says he will know a lot more about his team after this game.

Rhoads says Iowa is a sound fundamental football team that gives you a good measure of where your team is at. Rhoads says as with any rivalry there will be plenty of emotion but it is also important to keep that emotion in check. He says you have to play with raw emotion, but a one play at a time focus. Rhoads says you can celebrate after a play, but you have to come right back and be ready for the next play.