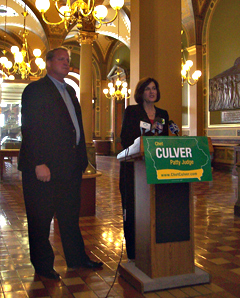 “I can’t imagine that the overwhelming majority of Iowans don’t believe that that should be covered,” Culver says, “and unfortunately it isn’t.”

The Iowa Association of Business and Industry issued a statement critical of Culver’s insurance proposals, saying it would add at least five percent to the cost of the premiums employers pay to provide insurance to their workers.

Culver, a Democrat, is seeking a second term as governor.  His Republican challenger, Terry Branstad, says Culver’s proposal should be carefully reviewed because “raising the cost of doing business…is not a good idea.”

Culver made his comments Thursday afternoon during a statehouse news conference with Vicki Kennedy, wife of the late Senator Ted Kennedy.  She was the featured guest at a Culver campaign fundraiser this evening in central Iowa.

“We’ve had Senator Kennedy and Patrick and other members of the Kennedy family come out and campaign with Culvers dating back to 1964, so we’re carrying on a winning tradition when it comes to joining arms and working together,” Culver told reporters.

Culver’s father, John, met Ted Kennedy when the two were freshmen at Harvard and they shared a life-long friendship.  John Culver is a former Iowa congressman who served one term in the U.S. Senate.