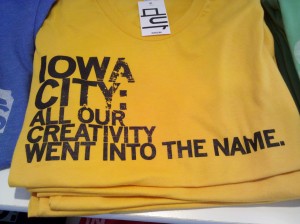 The owner of a Des Moines T-shirt company says he’s hoping most Iowans find humor in a line of shirts featuring quirky, unofficial slogans for a number of cities across the state.

Mike Draper, owner of Raygun, says most people get a chuckle out of the shirts. But, he’s also received a few phone calls and emails from city leaders who aren’t laughing. “I’ve always liked the ‘Gettin’ lucky in Council ‘Tucky” shirt, which the Council Bluffs Chamber of Commerce wasn’t too happy about, but people from Council Bluffs submitted the idea,” Draper said. “People from Omaha love it.”

One line of shirts was recently pulled from Raygun shelves after city leaders in Waterloo raised concerns. The shirt featured the words “Waterloo: you may recognize us from ‘Cops.'” City leaders said they were offended with the slogan and an online ad on Twitter showing the shirt being worn by a black man. Draper says the shirt and ad were not intended to be racist or offensive, but he agreed to pull the shirts from shelves.

The Cedar Rapids’ shirt – featuring the slogan “Above water since 2008” – has also drawn some criticism. “It’s funny to see what people are sensitive too,” Draper said. “We also thought about doing ‘500 years, my ass’ and I guess some people liked that one.”

Raygun started soliciting the slogans from the public two years ago and awarded a $150 prize to each creator. “The one I really like is one of the newer ones that says ‘Clear Lake: the Hamptons of Mason City.’ A friend of ours who grew up in Mason City came up with that. It’s partly because of the art – it has a martini glass sitting on a money bag. It just plays to the absurdity that Clear Lake is so wealthy,” Draper said.

Some of the other Raygun shirt slogans include:

Iowa City: All our creativity went into the name

Quad Cities: Twice as nice as the Twin Cities

Sioux City: The hottest thing north of Omaha and south of Sioux Falls