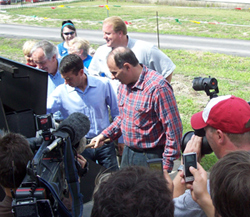 Senator Tom Harkin’s annual “Steak Fry” fundraiser in Indianola was a bit of a pep rally for the fall election, with some tutoring from two men who had key roles in Barack Obama’s 2008 campaign.

Harkin told a few jokes, but he had some tough talk, too. “I’m fed up with people sitting around gazing at their navels and asking, ‘What’s it going to take to fire up Democrats this fall?’  Well, I’ve got a simple answer to this:  winning campaigns are not about magic or mood control or passions — they’re about deciding to stand up for what we believe in.  It’s about getting down to work, so friends, enjoy the festivities today.  Have another beer,” Harkin said, as the crowd laughed. “Tomorrow we’ve got to go to work.”

David Plouffe worked on Harkin’s 1990 Senate campaign and Harkin’s 1992 presidential campaign.  In 2008, he was Barack Obama’s campaign manager. “You have a good opportunity to remind your neighbors and your friends and your family members about who the real Republican Party is  because the very best organizer and fundraiser in the Democratic Party is going to be here in Iowa,” Plouffe said, before saying her name:  “Sarah Palin.”

Palin, the Republican Party’s nominee for vice president in 2008, is scheduled to be in Des Moines this coming weekend to headline an Iowa G.O.P. fundraiser. 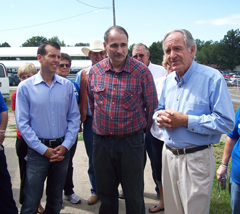 White House Senior Advisor David Axelrod was Obama’s chief political consultant in 2008.  Axelrod urged the crowd of Democrats to ramp up early voting efforts to help Culver win reelection.  “It’s a little hard for me to understand why this is even a question, but, you know, nothing says the future likeTerry Branstad, I guess,” Axelrod said as the crowd laughed.

Governor Culver spoke to the crowd about an hour before Axelrod did. “People say it’s ‘do or die time,'” Culver said. “Well, I say it’s ‘do time’ because Democrats are fired up and we are going to win this race in 50 days.  We are going to do it, together.”

Roxanne Conlin, the Democratic Party’s nominee for the U.S. Senate, drew applause from the crowd when she mentioned her weekend appearance with Republican Senator Chuck Grassley on Iowa Public Television.

“Well, I’m glad you saw it, because as far as I know, he’s not comin’ out of his house again,” Conlin said, to laughter.  “But you can make him because he owes the people of Iowa a defense of his record.  Why in the world did he do the things that he has done? Why in the world does he keep on doing them? Come out, Senator Grassley!  Stand on a stage with me and defend what you have done to the people of the state of Iowa!”

Listen to all of the speeches here.