You are here: Home / Military / Iowa Medal of Honor winner “at a loss for words” 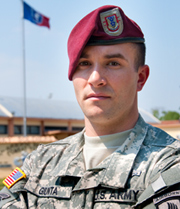 An eastern Iowa native who will receive the Medal of Honor spoke with ABC’s chief foreign correspondent in his first broadcast interview. Army Staff Sergeant Salvatore Giunta, a 25-year-old who grew up in Hiawatha, will be honored with the military’s highest award.

“I’m still at a loss for words,” Giunta said. “I don’t know how to take it.” Giunta earned the Medal of Honor for his actions in Afghanistan. In October of 2007, insurgents attacked his squad of eight soldiers and Giunta, who was 22 at the time, charged into enemy fire to pull a wounded soldier to cover.

Giunta was shot in the chest during the fire fight, but he was saved by protective body armor. Giunta is the first living soldier who’s served in Iraq and Afghanistan to receive the Medal of Honor.

“It’s a huge award that I can’t accept alone, not by myself,” Giunta told Martha Raddatz of ABC News, “because so much of everything that has put me in this chair, talking to you today, is and always has been about all of us.”

President Obama telephoned Giunta last Thursday. An award ceremony will be held at the White House, but a date for that has not been set. Giunta’s currently stationed at an Army installation in Italy.

Portions of Giunta’s interview with ABC aired on the network’s Nightline program.