You are here: Home / Education / Students in one Iowa school have the option to stand at their desks 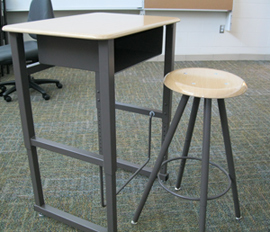 Fifth and sixth grade students in the Garner Elementary School in the Iowa City School District have the rare option of sitting down or standing up at their desks.

Garner principal, Mindy Paulsen, saw a story on the national news about the stand up desks being used in Minnesota, and decided to try three of them at the school she was overseeing at the time.

She says the desks also have a u-shaped “wiggle bar” that allows them to wiggle their feet while seated at the desks.

Paulsen says the “wiggle bar” allows students an outlet for nervous energy, without doing something that takes them away from learning.

She says it allows the students to focus and the teacher can keep teaching, and if the student feels like they need a little activity, they can do that with their feet and not distract classmates. Paulsen says for the most part it is going well. The desks include a stool to sit on and do not have a back like a chair, which she says some students find tougher to sit on.

Paulsen says the stools are made out of the same material as the chairs in the classrooms and she wants to look into getting some cushions for the children who do not feel as comfortable sitting on the stools. Paulsen says they purchased the desks from Iowa Prison Industries, which makes the other school desks too. She says so far she’s not heard of other schools ordering the stand up desks, but says she’d recommend it.

“Given the results that we have with out kids, I would encourage other schools to take a look at ’em,” Paulsen says. She says it gives them another option for taller kids. And she says they talk with the kids about how they are on their way out of elementary school to junior high and when they get to use the tall desks. Paulsen says the stand up desks cost a little more than regular desks, but offer more advantages to students.