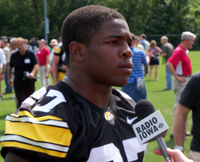 The Iowa Hawkeyes lost more than just a game at Arizona on Saturday night. Coach Kirk Ferentz says sophomore running back Jewel Hampton is out for the season after suffering a torn ACL in his left knee.

Ferentz says Hampton is “very disappointed” as he has invested a lot in the team and is a very competitive player.

Hampton was just rounding back into form after missing the entire 2009 season with the same injury to his right knee. Ferentz says the only good news is that there have been players who went through similar experiences, such as Albert Young and Chad Greenway, and they are still playing and having productive careers.

With Paki O’Meara out this week after suffering a concussion the Hawks are getting thin at running back. Ferentz says a pair of freshmen, De’Andre Johnson and Marcus Coker will need to be game ready on Saturday. He says it’s tough with Coker as he has just returned from getting hurt and Johnson has been on the scout team, but they will try to get them caught up.

Kickoff coverage is a major focus this week after Arizona returned a kickoff for a touchdown. He says they have traditionally been very good at coverage except for the last game of 2008, which he called “a travesty.” Ferentz says they will get it worked out. Backup linebacker Bruce Davis is also out for the season after suffering a torn ACL in Saturday’s game.