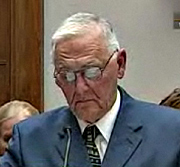 The owners of the Iowa egg operations that are at the center of the salmonella outbreak and egg recall told a House committee that they are sorry and have taken steps to prevent future outbreaks at their farms. Austin “Jack” DeCoster, the owner of Wright County Egg, opened with a statement of contrition.

“We were horrified to learn that our eggs may have made people sick. We apologize to everyone who may have been sickened by eat’in our eggs,” DeCoster said, “I have prayed several times each day for all of these people for improved health.”

Decoster blamed the problems on an operation that grew too large. “Unfortunately, we got big quite awhile before we stopped acting like we were small. What I mean by that is, we were big before we started adopting sophisticated procedures to be sure we met all the government requirements,” DeCoster testified, “while we were big but still acting like we were small, we got into trouble with government requirements several times.” DeCoster says they have worked to improve their operations.

DeCoster says he is sorry for their failings and accepted the responsibility for the mistakes in their operations. He says he eventually realized to put the problems behind them they would have to become good at meeting all the government requirements, and for the last ten years they have focused on doing that. DeCoster’s statements did not seem to convince members of the congressional committee that the company had taken steps to ensure the safety of the eggs.

DeCoster’s son Peter, the chief operating officer of the company, was questioned extensively about the recent F.D.A. inspections that found numerous problems at the facility. Peter DeCoster was asked in particular about a building where the doors were bulging out from manure, and how it could happen if the company was keeping up.

Peter DeCoster said he agreed the manure accumulation was not an overnight issue, but he say the doors coming open is an overnight problem. “The weather through this past winter, and this past spring in Iowa has been unbelievable, the likes we have never seen before,” DeCoster explained, “the local co-op who takes our manure out for us was just behind…I take full responsibility.”

DeCoster was asked if the manure was overflowing because they had too many chickens in the building, but he said they only had 80,000 in a building rated for 101,000. DeCoster said each of the cases cited in the F.D.A. report had to be addressed individually, and said they had processes in place to take care of rodents and flies and other problems cited in the report.

Iowa Congressman Bruce Braley, a Democrat from Waterloo is on the committee. Braley read several headlines on stories about the egg recall and its problems. Braley then questioned the DeCosters and Duane Mangskau the production supervisor of Hillandale farms which supplies eggs that were also recalled. Braley asked,”Do you feel any personal responsibility to the impact that this recall, this massive recall is having on egg producers.” Mangskau replied,”It is uh, too bad that this occurred and we do feel sorry for any inconvenience and cost that it has caused the industry.”

Peter DeCoster also responded. “Absolutely, I mean this is an issue I feel terrible that has occurred, and it’s uh affecting our industry,” Peter said. Braley then asked Jack DeCoster to respond:”I feel bad, very bad, it’s a horrible thing,” Jack DeCoster replied. Braley said he did not feel confident that DeCosters understand the impact.

“The problem that a lot of us have here on this committee is a sense that there is a disconnect between the problems identified in these stories and identified in the F.D.A.’s investigation and a sense of responsibility,” Braley said. While the DeCosters and Mangskau testified, Orland Bethel, the president of Hillandale Farms, invoked his Fifth Amendment right to not answer questions.