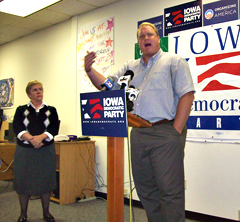 Governor Chet Culver and the Iowa Democratic Party’s chairwoman say their party’s get-out-the-vote effort will exceed expectations — and has already exceeded what the party had done by this time in the 2002 and 2006 campaign seasons.

“If the Republicans want to start, you know, popping champagne corks, that’s great ’cause it’ll take them away from the real tough work of turning out the vote,” Culver says. “They’ve been overconfident before. Remember Governor Lightfoot? And they’re overconfident this year.”

The Iowa Democratic Party started its voter turnout operation last October. Sue Dvorsky — the party’s chairwoman — calculates that, as of today, Democrats have lined up four times as many absentee ballot requests than Republicans have.

“Early” voting starts tomorrow in Iowa. Eligible voters can go to their county auditor’s office to cast their ballots. Some “satellite” sites for early voting will be set up in public places like libraries as well.

Dvorsky says the party’s get-out-the-vote effort will shift for the final four days of the 2010 campaign. “Going to the doors — we’ve got the list of the people who haven’t voted yet — and working that. And I would submit to you, and I know that I’m biased, that we are better at that than anybody. In fact, we are better at that than most parties in any other state,” Dvorsky says. “That is the thing we know how to do. (With) that kind of retail at the door those last four days, we will blow expectations out of the water.”

Democrats currently hold a voter registration edge over Republicans of about 55,000.  But the largest category of voters are independents, those who check “no party” on their voter registration documents.  Dvorsky says her party is particularly focused on those voters and on voters who don’t normally vote in “off-year” elections. Younger Iowans who voted for the first time in 2008 are also a target.

Dvorsky and Culver held a news conference this morning in Des Moines, and answered reporters’ questions about the party’s early voting strategies.  “We take the lessons that we’ve learned from the two years before. We take the lists that we have from the two years before…Really, it’s a different program than we were working in 2006,” Dvorsky said.

Matt Strawn, the chairman of the Republican Party of Iowa, issued a written statement, saying absentee or early voting “is but one part of the Iowa GOP’s comprehensive voter contact program.”

Strawn said Republicans — for the first time — worked to “develop” early voting locations “all across Iowa.”

“While we are confident this will yield tremendous dividends for our candidates, it is ultimately the Republican message of bringing competent, principled leadership to Iowa that will drive more Iowans to vote Republican than Democrat this fall,” Strawn said.