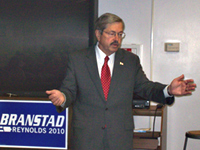 Terry Branstad, the Republican candidate for governor, has released a proposal that targets what he calls “job-killing bureaucracy.” Branstad says if he’s re-elected to a fifth term as governor, he wants to subject state rules and regulations that impact job creation to new scrutiny.

“What we want to do is make Iowa more attractive for business and jobs and reduce some of the burdens that state government has placed on business,” Branstad says. “But we want to do it in a thoughtful, systematic way.”

If state agencies can justify the rules and regulations, Branstad says the rules would be kept.  If not, they’d be eliminated.   “Iowa employers support and will prosper under reasonable regulation,” Branstad says. “However, when bureaucrats go too far and make it difficult for employers, it puts us at a competitive disadvantage to other states.”

Branstad envisions a review of all state rules and regulations that impact job creation within the next four years.  He’d ask legislators to pass a law eliminating existing state regulations that impact job creation by 2014. Branstad says that would pressure bureaucrats to complete the formal review of individual rules and only have the worthy ones reinstated by that date.

“We must make changes in the way these rules are created and enforced if we are to restore our ability to grow high-quality jobs here in the state of Iowa,” Branstad says.

Branstad also promises to issue an executive order which would require state agencies to draft a business-impact statement outlining how any new rules and regulations would impact job creation and job growth in Iowa. 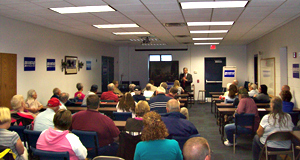 Branstad outlined his ideas during a speech this afternoon at Southwestern Community College in Creston.

“Terry Branstad’s underhanded deregulation plan would make it easier for his corporate cronies and lobbyist buddies to get rid of regulations…These regulations are here for a reason — to help protect the safety and security of Iowans.”