You are here: Home / Agriculture / Iowa native testifies about bout with salmonella 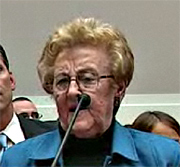 A woman who grew up in Iowa testified about her bout of salmonella poisoning during a hearing in Washington, D.C. on Wednesday.

Jack DeCoster, owner of the operation that’s been at the center of a nationwide egg recall, apologized during the hearing to the hundreds of Americans who were sickened after eating eggs this summer.

Carol Lobato, a 77-year-old from Littleton, Colorado, got sick after visiting an “upscale” restaurant that serves exotic dishes like the “rattlesnake cake” she ate on July 10.

“The next afternoon I felt very sick,” Lobato said. “At the beginning I started to shake and experienced chills.”

She soon experienced other symptoms — nausea, diarrhea, and a fever. Lobato was eventually admitted to the hospital for five days.

“The salmonella infection is not over for me. I have lost my stamina…I feel very tired and require rest during the day. I lost eight pounds in the hospital, which was the only plus of this ordeal,” Lobato quipped, and people at the congressional hearing laughing. “My doctors told me that I almost certainly would have died without aggressive intervention.”

According to Lobato, the strain of salmonella she was struck by is the “exact DNA match” to the salmonella found at the Wright County Egg operation.  Her husband and grandson also got sick, but their conditions weren’t as serious. “The (Centers for Disease Control) and Jefferson County (Colorado) Department of Health later determined that the rattlesnake cake that we consumed (at the restaurant) was the source of our illness,” Lobato said.  “Through a track-back procedure, investigators found the eggs used in the rattlesnake cake had not been properly cooked.”

Lobato told the congressional committee she grew up on an Iowa farm and had been responsible, as a child, for gathering eggs in her family’s chickenhouse. That’s why Lobato said she was shocked by the unsanitary conditions investigators reported inside the egg-laying facilities in north central Iowa.

“Thank you for inviting me to Washington to share my story,” Lobato said. “I hope that by doing so together we can make our dinner tables and our entire food system safer for all of us.”

Lobato called for more federal food inspectors. She also asked that congress require testing of food “before it leaves the factory.”