Des Moines police, the Iowa State Patrol and Iowa State Fair officials said Wednesday they will look at adding more officers, and do a better job of coordinating their law enforcement efforts in 2011 to the problems that happened on the first and last weekends of this year’s fair. Several people were assaulted outside the fair and the attacks initially appeared to be racially motivated after a police report said attackers were calling it “beat whitey night.”

All of the victims were white and all of those charged were black. Des Moines police later said there was no evidence to indicate the attacks were racially motivated. Chief Judy Bradshaw says they have taken a two step approach. She says the first on is that they want people to bring their friends, family and kids to the fair to enjoy the food and fun, “because you’re going to be safe.” Bradshaw says that goes in hand with their second message.

Bradshaw says, “For those that want to attend the fair or go on the perimeter of the fair and you have chosen to either intimidate, or commit assault, or break the law, you’re going to be arrested.” Bradshaw says people who don’t want to have a good time should stay away.

Bradshaw says having a safe, fun, friendly state fair and breaking the law don’t go together, and they are going to have “ample resources on hand to make certain that all of the public is going to be safe.” Des Moines police handle the law enforcement outside the fair gates, while the Iowa State Patrol and fair police handle it inside. 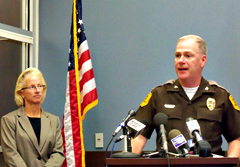 State Patrol leader, Colonel Patrick Hoye, says they will beef up their force of men and machinery. Hoye says they will be adding additional state troopers inside the fairgrounds and are working on issues such as lighting and adding cameras, and will work closely with Des Moines police to coordinate efforts.

Hoye says the number of arrests as the state fair has been dropping in recent years. Bradshaw says they also be using cameras outside the fairgrounds and will especially be paying attention as thousands of people leave the fairgrounds at closing time.

Bradshaw says some of the coordination will be in what happens at closing, how the cameras will be deployed, when and where the officers will be deployed at closing. She says they will also look at other exits for people as a possibility.

Bradshaw says she believes they had enough officers in place to handle the assaults that happened on the last weekend of the fair.