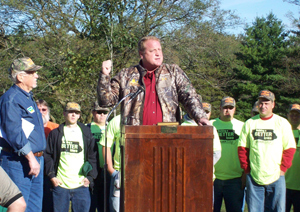 This past spring Culver signed a bill the N.R.A. had lobbied for, a bill that sets up a uniform system for issuing permits to Iowans who want to carry a concealed weapon.

In the past, Iowa’s 99 county sheriffs had broad discretion to approve or deny the permits and many of the N.R.A.’s 75,000 Iowa members lobbied for the bill Culver signed.

“We have gone further than any administration in 100 years to protect the Second Amendment by passing and I was honored to sign the ‘Shall Carry’ legislation this year,” Culver said this morning. 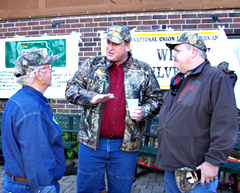 Culver is comparing his record on gun rights with that of his Republican opponent, former Governor Terry Branstad. “For 16 separate legislative sessions, time after time, he would tell the National Rifle Association that he supports that bill and time after time after time he broke his promise and he failed to deliver to those Iowans who support the Second Amendment,” Culver said. “That’s precisely why the N.R.A. endorsed my candidacy, my reelection effort, because we made a promise as a candidate in 2006 and we delivered on that promise.”

Culver spoke this morning at a news conference held outdoors.  Culver wore a camouflage jacket, as did some in the crowd. “We’re not worried about the pollsters and pundits. I’ve got people like this behind me every day and I appreciate the members of the NRA, the members of unions and labor organizations that have come this morning to stand with me because I have great faith in the people of this state,” Culver said.  “It’s the issues and the record and the vision that should determine who wins and loses elections, not the false promises that Terry Branstad continues to make.”

After the news conference, brown caps with “Sportsmen for Culver” printed on the front in blaze orange were handed to participants. About half an hour later, Branstad was holding a news conference of his own, standing in front of a handful of Des Moines policemen wearing black t-shirts with “Police Officers for Branstad” in white lettering. 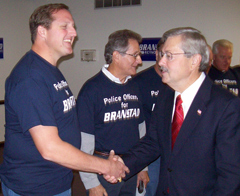 Branstad was endorsed today by the Des Moines Police officer’s political action committee, representing about 600 current and retired officers. The PAC endorsed Culver in 2006, but the Des Moines police officers are upset Culver vetoed a bill that would have expanded their ability to bargain, through their union, for additional contract items, like coverage for protective gear. Branstad, however, promises to do as Culver did and veto such a bill.