You are here: Home / Politics / Govt / Obama to have “backyard conversation” in Des Moines

President Obama will meet with a small group of Iowans Wednesday morning for a backyard conversation about the economy. The invitation-only event will be held at a home on the northwest side of Des Moines.

According to White House communications director Dan Pfeiffer, the hosts of the event — Jeff and Sandy Hatfield Clubb of Des Moines — were asked to invite a few of their neighbors. “It’s people from the community.  It’s not a screened crowd.  It’s not a hand-picked crowd,” Pfeiffer says. “You get a wide array of questions on a wide array of issues and that’s what the president enjoys.”

Pfeiffer says the president does plan to spend some time talking about the upcoming election and the “Pledge to America” Republicans in the U.S. House unveiled last week. “This would be a disturbing return to the set of rules that helped create the financial crisis we’re in,” Pfeiffer says.

Governor Chet Culver, a Democrat who’s facing a tough reelection battle, was among a small group who met Obama at the airport earlier tonight and Culver plans to be with Obama at tomorrow’s event. “I think it’s important that voters know that we’ve governed effectively,” Culver says. “We’ve gotten things done during some very challenging times.” 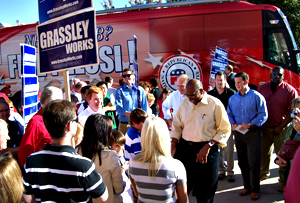 The chairman of the Republican National Committee brought his national bus tour to Des Moines a few hours before Obama arrived last night.

Republican National Committee chairman Michael Steele stood outside his big red bus to speak with reporters and he criticized the format of Obama’s event in the Des Moines neighborhood of Beaverdale.

“I mean, you’ve got — basically — a sort of fixed audience. It’s not opening up to the people of Iowa to come and ask questions, so it’s not a traditional town hall meeting,” Steele said. “And the press is there and that’s nice but, you know, the issues right now don’t rest with the press. It rests with the people and the people are the ones with the questions.”

Steele suggests not much will come from today’s event. “These things kind of fall…on deaf ears and they fall flat and a lot of people don’t understand why after almost two years you haven’t understood what they’ve been saying to create jobs.  We’ll see what he says,” Steele told reporters, laughing as he added: “Welcome to Iowa.”

Republican Terry Branstad, the former Iowa governor who is seeking a fifth term this November, is urging Iowa Republicans to send Obama a message this November. “This is the year, 2010, when Republicans can stage a great comeback all across America, but it starts right here in the first caucus state in America where we started it and we need to end it,” Branstad said Tuesday afternoon, a reference to Obama’s 2008 Iowa Caucus victory that helped propel him to the White House. 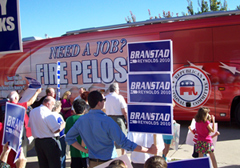 Branstad and the Republican National Committee chairman spoke late Tuesday afternoon to about 100 Republicans who gathered in the party’s central Iowa “victory center” for a pep rally. “You’re going to go out there and just churn it up.  Churn it up!” Steele said.  “I’m so excited, I wish we could just go out there and vote now, you know?”

People in the crowd started yelling: “You can.”  Iowans started voting via absentee ballots last week.

Steele spoke for over 15 minutes, at one point telling the crowd there was hard work ahead. “Get out there. Get busy. Don’t screw it up,” Steele said and the crowd laughed.

Steele has come under fire for taking his bus tour to all 48 contiguous states rather than focusing the national party’s resources on key races, but Steele told Iowa reporters the bus tour is his way of igniting the party’s “grassroots” rather than paying attention to the “GOP establishment in Washington.”