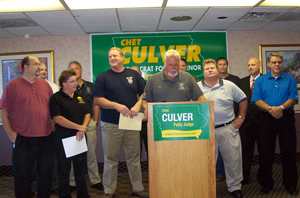 The state’s Teamsters have endorsed Democrat Chet Culver’s bid for reelection as governor. About a dozen of the union’s members gathered with Culver in Des Moines this morning to make the announcement.

Gary Dunham, the secretary-treasurer of Teamsters Local 238 in Cedar Rapids, says his union had “long conversations” with both Culver and his Republican rival, Terry Branstad — the former governor — and they came to the conclusion that Branstad will be a foe of organized labor.

“It is for that reason we fully endorse Chet Culver for governor in 2010,” Dunham says. “We look forward with Governor Culver for many years to come.”

Culver raised the ire of unions three years ago when he vetoed a bill unions favored.  Dunham says while that rift has been “well-documented,” Culver has the “full” endorsement of the Teamsters. “We’re not going to get everything that we desire, but it’s certainly more favorable for working-class people in this state with Governor Culver in charge,” Dunham says. 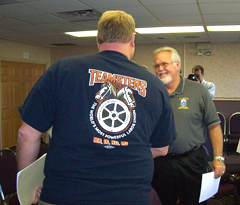 Governor Culver wore a Teamsters t-shirt while picking up the group's endorsement.

Dunham says one reason the union is backing Culver over Branstad is because Branstad, during his previous tenure as governor, tried to use the pension funds for state workers to balance the budget.  Dunham expects Branstad to try to “raid” the pension funds again, by reducing the pensions for public workers.

“Those are promises that we, as Iowans, have made and we need to keep those promises,” Dunham says.  “Our integrity should be worth something in this state, for all of us, and this game-playing — it’s unfortunate.”

The three Teamsters “locals” in Iowa represent about 12,000 active members and another 6,000 retirees.  Culver is touting this endorsement, along with Monday’s endorsement from the National Rifle Association, as signals he can erase the 20-point lead Branstad was shown to have in this weekend’s “Iowa Poll” in The Des Moines Register.

“I have great confidence and faith in the electorate,” Culver said. “We have a long way to go in this race and this endorsement today is clearly one of the most important that I have received.”