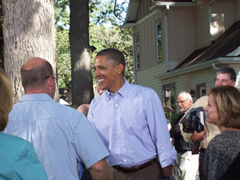 President Obama talks with those who attended his backyard meeting in Des Moines.

President Obama answered questions from a handful of the 70 people who were invited to a “backyard conversation” with the president today.

Republican David Greenspon, a small businessman from Des Moines, pressed the president about tax policy and the financial burden of providing health care coverage to his employees.

“I guess what my commentary comes down to is as the government gets more and more involved in business and gets more involved in taxes to pay for an awful lot of programs, what you’re finding is you’re strangling those job creation vehicles. You’re sort of strangling the engine that does create the jobs,” Greenspon told the president.

Greenspon, who rents office space to Republican Terry Branstad’s gubernatorial campaign, was invited to the event because his small business supplies material to the Drake Athletic Department and the backyard where today’s event was held in the backyard of Drake’s athletic director. Ninety-three-year-old Paul Morrison, a retired spokesman for Drake athletics, shook the president’s hand.

“How easily he answered questions from the audience was very impressive to me,” Morrison said after the event.  Morrison invited the president back to Des Moines for the Drake Relays next spring, and when the president asked Morrison if he would compete, Morrison said he’d be “running in the old man’s race.” 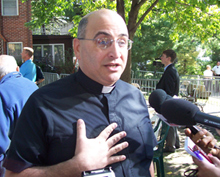 Obama called on Father Michael Amadeo of the Holy Trinity Catholic Parish in Des Moines to ask the last question of the morning.

“My question for you comes from a member of my congregation who is 55 years of age, has a wife, two children who are freshmen in high school. A year ago he lost his job in manufacturing.  He’s been unemployed now for a year plus,” Amadeo said. “What will your economic policies do for him in the next year to hopefully secure a job and have that American dream again, which has been lost?”

Obama replied: “Well, obviously, that story is duplicated all across the country.” The president said he’s recently signed legislation to spur investment and job creation in small businesses. Obama also touted job retraining as a means of helping workers who used to be employed in manufacturing to get a new job in the “clean energy” industry.

After the president left, the priest spoke with reporters. “It’s tough to be patient, but that’s what I think he’s calling for us to,” Father Amadeo said, “to be patient for this economy to continue to grow.”

Amadeo said for the unemployed, however, it’s tough to wait. “I think our country right now is very, very divided and I don’t think it’s healthy for our country,” Amadeo said.  “So I’m not sure they’re going to be patient.”

Jeannette McKenzie, the neighbor who lives next door to the family who hosted Obama today, had a long conversation with Obama during the question-and-answer session. She voiced concerns about health care reform.

“I just want to identify what your worry is because I want to say you shouldn’t be worried about it,” Obama told McKenzie. “But what is it that you think might happen to your health insurance as a consequence of health care reform?”

The woman responded: “Just say if my husband got laid off, say we had no health insurance…and then we’d get the government-run health insurance, right?  Is that what you’re saying?”

Obama spent a few minutes laying out the options.  McKenzie responded with more concerns. “We all agree there needs to be health reform, OK?  We just moved out here a year ago from Las Vegas, OK? There are illegal immigrants that are getting free health care right now, OK?” McKenzie told Obama. “The doctor we had, clinics and stuff, closed up. They couldn’t even afford to stay open because of all the illegal immigrants that were getting health care.”

Obama said undocumented workers normally do not seek medical treatment because they’re worried they’ll be discovered by authorities and deported, but Obama added he hopes the United States is a “compassionate” society that provides help to immigrants when they’re critically injured. 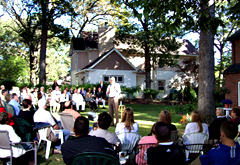 Obama answered questions for about an hour, then shook hands and posed for pictures with the crowd.  Republican Dave Naughton, a neighbor who lives down the street, sat in today’s audience, but didn’t get to ask a question of the president.

“Deep down, I think he was being honest and, you know, telling us how he felt and what he wants to see happen with the economy and with the country as a whole,” Naughton said.  “…I just hope the economy turns around and the stuff and the programs that they’re putting in place truly work.”

Obama is scheduled to hold a similar “backyard conversation” in Virginia later this afternoon.

Listen to today’s “backyard conversation” in Des Moines, which lasted about an hour and 14 minutes: BackyardConvoDM

Read a live blog of the event or click through a slide show of photos.