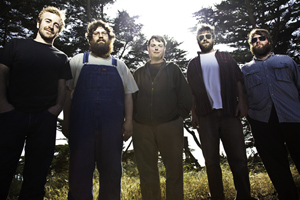 Members of a Minnesota band whose debut album entered the Billboard Bluegrass chart at number-one bring their act to central Iowa tonight and to eastern Iowa next week.

After playing in rock and punk bands, the quintet Trampled By Turtles formed in 2003 in Duluth as an experiment and a welcome break from the norm. Some call the band’s musical style “speedgrass” and mandolinist/songwriter Erik Berry says it’s not your grandfather’s bluegrass.

“We call ourselves original non-traditional bluegrass music,” Berry says. “Most of our music is written by us. We’re not traditional at all but when you hear a mandolin, a violin, a banjo, an acoustic guitar and vocal harmonies, what does that remind you of? It makes you think of bluegrass.” Berry says they were all in other bands when the actions of a petty thief sparked the beginning of Trampled By Turtles.

“Simply enough, it began when (singer & guitarist) Dave Simonett had an electric guitar stolen and he had to start playing acoustic gigs because it’s the only guitar he had left,” Berry says. “I invited myself to play mandolin with him one time when he was opening for my band at one of our last shows in Duluth.” The cross-genre sound of the band has led to an unusual skewing in the band’s audience demographic. Berry says they’re still the same teens and 20-somethings as when they played rock and punk, but now he says, they also have growing base of older fans.

“A lot of our shows are at clubs and the showtime is 10 o’clock or later so that kind of weans it down to college-age kids or maybe folks a little bit older than that,” Berry says. “I know that we’ve got a lot of fans who are 40, 50, 60 years old but just a lot of times we don’t play concerts they can really go to.”

Trampled By Turtles plays tonight at People’s Court in Des Moines and returns to Iowa next Wednesday (October 6th) to play the Blue Moose Tap House in Iowa City. Learn more at: www.trampledbyturtles.com