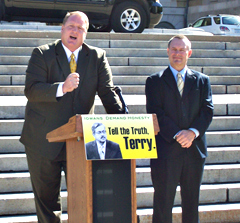 Governor Chet Culver and State Treasurer Michael Fitzgerald — both Democrats — held a news conference this morning on the steps of the statehouse to announce the books on the fiscal year 2010 state budget are officially closed, and the state had a $335 million surplus.

“The issue of truth in budgeting is important because of my opponent in this race, Terry Branstad, has been dishonest with Iowans about his practices with respect to the budget and ours. He is simply not telling the truth,” Culver said. “Today, I am calling on Terry Branstad and others who have been dishonest about our budget, and we’re asking them to come clean and to tell the truth.”

Culver told reporters there’s “never been a day” during his 44 months as governor that the state budget hasn’t been balanced and Culver blasted Branstad for “failing to balance 12 budgets in a row,” during his 16-year tenure as governor. “This is not rhetoric,” Culver said. “It’s the record and you can look it up.”

The state’s budget situation has been a key issue in the 2010 gubernatorial race, with Branstad accusing Culver of mismanagement. Culver today compared his record during a recession to Branstad’s record during the Farm Crisis, when state government borrowed $3 billion to meet cash flow and pay bills.

“Just to keep the lights on and to keep checks from bouncing,” Culver said.  “…Terry Brantad reminds me of the slick Wall Street operators who made people believe there would be big money returns every year right up until their lives collapsed around the crash of 2008. It’s wrong to promise people something you know you cannot deliver on and Branstad’s (promises) to balance the budget are just smoke and mirrors.”

The last state fiscal year ended June 30, 2010 and the official report on that 12-month period was filed today. According to State Treasurer Michael Fitzgerald, it shows another $420 million was deposited in the state’s cash reserve as well.

“Iowans have been led to believe we have a mess, we have a deficit.  We don’t.  The next time somebody tells you that, ask ’em: ‘Where’s the audit? Show us an audit that ever said Iowa had a deficit. Show us the evidence,'” Fitzgerald said during today’s news conference.  “We have the money in the bank. We have surpluses and a balanced budget.”

“Chet Culver is proud of his surplus. He shouldn’t be,” said Branstad communications director Tim Albrecht in a written statement. “…This surplus is put on the backs of property taxpayers, laid-off teachers and furloughed government employees. This is hardly something to be proud of.”